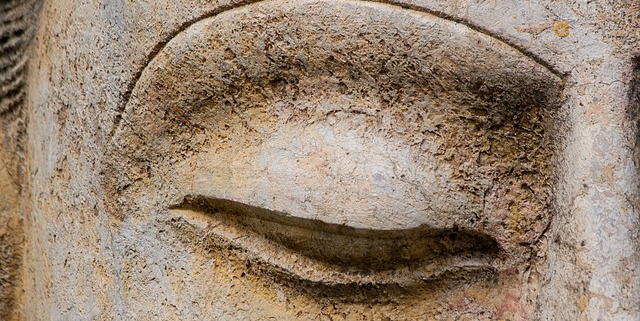 Key to developing your yoga practice beyond the physical element is pratyahara. This is a yogic concept generally taken to mean withdrawal of the senses. In Patanjali’s Yoga Sutras it is the fifth limb, and the bridge between external yoga (right ways of living, postures, and breath) and internal yoga (concentration, meditation and absorption). I used to teach yoga at a gym which had mirrors everywhere and lots of noise outside the room. It used to do my head in that everyone would just stare at themself in the mirror, and any attempt at meditation was interrupted by constant music. But most yoga these days rarely goes beyond limb 4 of Patanjali’s yoga. And if all you want is to improve your health or relax, then it probably isn’t important.

However there are really good reasons for developing the skill of drawing inside. Consider for a moment when you get distracted. Let’s imagine, like me, you’re writing something. Distractions coming in many forms, from social media notifications to songs on the radio, to smells from the kitchen to discomfort in the body such as being cold. What all these have in common is sensory input. Our senses interact with the external world and disrupt our focus. pratyahara helps us become aware of sensory distractions and start to control them.

During a Vipassana 10 day silent retreat, sensory input is largely removed. Mobile phones, books, pens and paper are taken away from attendees. Food is deliberately bland. People are encouraged not to look at each other. Yoga and other movement based practices are forbidden. In the absence of sensory stimulus, the mind falls quiet and meditation becomes easier. Of course in the real world, this is almost impossible but it can still be useful to take an honest look at the sensory inputs you allow every day & see how many you can remove.

Deaf, dumb & blind to the World

We can all do pratyahara – it’s what you do when you fall asleep. The better you are at pratyahara the better able you are to sleep through a thunderstorm or a party next door.  There are crazy stories of yogis who become so good at withdrawing from the outside world that a gun can be fired close to them with no reaction!

In many ways, practising yoga at home forces us to become good at pratyahara. It’s much harder to give in to distraction in a room full of people – for one, it will annoy everyone if you’re checking your phone every couple of minutes. But on the other end of a computer, nobody really knows or cares how many times you get up and move about, or check your email or talk to the dog. So, if you’ve managed to draw inwards during online classes then you can congratulate yourself! You are well on your way to achieving mastery over “the tyranny of your senses”, (BKS Iyengar).

But it isn’t just enough to close our eyes and turn the music off. As anyone who has used a floatation tank will tell you, after removing all stimulus, if you don’t focus you enter a sleep state. Similarly, if you remove all stimulus, close your eyes and settle into meditation, chances are that you’ll either fall asleep or be plagued by thoughts. In yoga the idea is to withdraw your senses from the external world but remain conscious and direct them internally.

One of the most common practices for withdrawal of the senses is bringing the attention inwards towards the breath, observing it without trying to control it, as connection with the external senses and stimuli are all gradually severed.

Another common technique is to reduce physical stimuli, then concentrate on one sense, such as hearing. The mind has a natural tendency to roam between the sensory inputs. In this situation, as there are no longer any other significant sensory inputs, when the mind gets tired of hearing, it is forced to turn inward.

The eyes have it

Human beings predominantly connect to the world around them through sight. Over 50% of the human brain is involved with processing sight. Where we place our gaze influences our physical body, both posture and alignment, and equally influences the energetic body. Normally, where the focus of the eyes go, the energy of the body follows.

Pratyahara uses progressively more subtle internal objects of focus. At the start, the objects of focus are “gross”, such as the points of focus (called drishti) used to accompany yoga posture practice, including the space between the eyebrows, the tip of the nose, or the navel. As you get more advanced, more subtle objects are used, such as the chakras, focusing on their position, colour, and energetic quality. You will know this if you practise Kundalini with me – those times in between exercises where we draw the attention inside and use the senses to survey the internal landscape.

By holding our internal gaze steady, we draw the energy of the mind to a single-point, shifting our energy from the world around us to the world within. Withdrawing the senses from external distractions allows us the ability to concentrate. Concentration, or dharana, is the sixth limb of Patanjali’s yoga. Let’s say we focus on the heart – to begin, we may need to imagine or visualise something here. Eventually though our focus picks up on something we are not creating, such as warmth or a colour. This is the seventh limb, dhyana; contemplation and reflection. Once the heart becomes the sole focus, ie there is no self identification or body awareness, then seer and the thing seen are no longer separate. This is samadhi, the eighth limb, the goal of all styles of yoga.

Aside from achieving samadhi, there is a huge health benefit to pratyahara – it develops interoception. Interoception is also a sense but in contract to exteroception (sensing the outside world through taste, smell, vision, hearing and touch), it is concerned with the internal state of the body. This is hugely important to our well-being – this is how our body speaks to our mind. The more skilled we are at interoception, the more able we are to sense if we are unwell, or in need of environmental change. Moreover, we are able to distinguish emotion from bodily reaction – for example am I stressed because I’m overworked or because I’m hungry?

Pratyahara alters the neural networks that are thought to control present moment awareness and the perception of bodily sensations. One study found that it altered the activity in two key brain areas: (1) the insula, which is thought to be involved in internal sensations (i.e., interoception) and (2) the dorsomedial prefrontal cortex (DMPFC), which is thought to contribute to mind-wandering. Specifically, they found that the participants practicing pratyahara or mindfulness had greater brain activity in the insula and decreased brain activity in the DMPFC. In short, pratyahara improves our ability to use interoception by inducing plastic changes to the very brain areas involved in interoception and mind wandering.

Studies have also shown that activity in the insula is markedly reduced in people with mental health issues. Research is underway to see if boosting interoceptive skills can be used as a way to improve mental health. If you’re interested in learning more about this, check out this wonderful article in Psyche.

So the next time you get annoyed by your husband or child making noise while you practise yoga, think of it as a blessing, and welcome it as a way to hone your pratyahara practice even more!