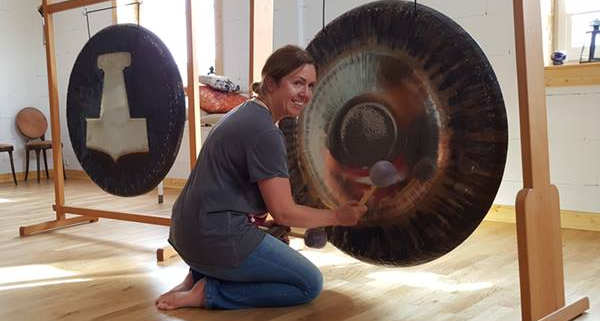 In 2018 Alex traveled to Germany to make a gong at the Oetken factory. He was so enthusiastic about the whole experience that I jumped at the chance the following year to do the same. And so we both traveled to Northern Germany in June 2019 to make gongs. 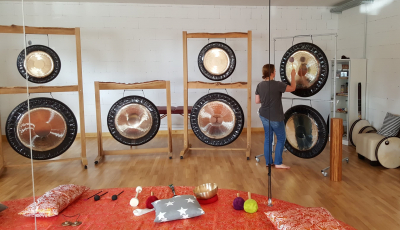 We were the first to arrive at the Oetken workshop and got shown into the adjacent “gong room” to wait for the others. This was like the gong equivalent of Tiffany’s showroom. Over thirty gongs, hung and ready to play (and buy). In the centre of the room a large round “floating” bed, covered in cushions, to maximise gong vibration. In the corner of the room a sound bed, like a massage table that vibrated with sound – (when I lay on it, the sound was Pink Floyd, Dark Side of the Moon – and you have never really “heard” that album until it’s played through every single cell in your body!).

Alex picked up a mallet and confidently declared that here was the gong we would be buying. Meet Mjolnir, Thor’s hammer. It rumbled, Hmm, close I thought, but no cigar. For right next to Thor was the most beautiful gong I had ever seen.

It turned out to be a 40 inch water gong. I’d never played one before – you can identify a water gong as the centre of the gong is hammered in, like an inverted nipple. The effect is an eddy, a whirlpool of sound. When I played the gong it was as though I was being sucked into it. It’s the most magical experience I have ever had with a gong. Much as I enjoyed making my own gong, the weekend for me was mostly about playing that water gong.

But I wasn’t the only one who wanted it. Everyone who played it fell in love with it. I broached the subject with Alex but he was having none of it. He had waited 12 months to buy Mjolnir, no way was he going to buy a water gong instead. It was a lot of money, more than I’d ever spent on anything. But I was tempted, really tempted. 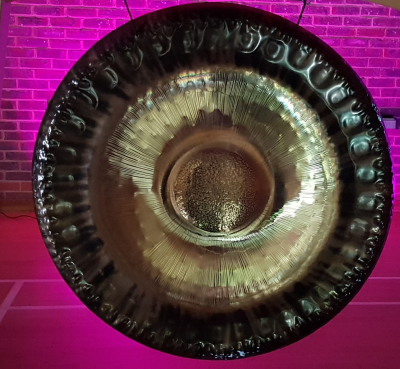 I’m still not sure what led to Alex’s change of heart but on our final afternoon there he relented. Maybe it was the disappointment in my eyes or the constant lamenting! We assumed that since there had been so much interest in the gong that it would have sold already. So we asked the Oetkens how soon they would have another one ready. No need, they explained, this one is yours! We shook hands on it and I left Germany beaming. I flew to Fez a couple of days later for the Sacred Music Festival, leaving Alex at home to take delivery of the gong.

It is the only one of our gongs that I have never allowed any one else to play. It’s just too special and personal. Still now when I play that gong I lose myself in it. There is a power and magic within it that I can’t describe. We’ve had really weird experiences with the gong too. There was one gong bath when I played it and afterwards over half the participants all described the same experience. They felt they had been drawn into a tunnel filled with water and floated away. We had some disoriented clients that day. It still blows my mind. 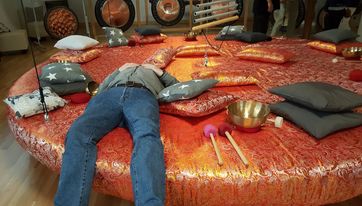 It is a tale as old as time itself, that of love (or lust!) at first sight…

In the very tip of Northern Germany, just South of the Danish border, lies a very special area for Gongsters in Schleswig Holstein.  I first traveled there in 2018 to learn how to make gongs under the watchful eye of arguably the best Gong Maker in the world, Broder Oetken. For those who are new to gongs this man’s pedigree is beyond reproach. He is the link between Paiste and Meinl Gongs and was trained himself by the famous Walter Meyer and indeed still uses the tools that the great man passed onto him which, I am proud to say I used to make my gongs.

Anyway, I digress, back to the love story. Our eyes met across the crowded workshop floor of Broder’s workshop area. I had never seen such a beauty, the curves, the rich deep colours, the air of mystery and mischievousness intoxicated me. I had to know this creature.  Now, before you all think that I was embarking on some form of illicit relationship worthy of a Mills and Boon, I am referring to a magnificent gong that was hanging in a back area of Broder’s workshop area.  “Was ist das?” I asked Broder in my Taube German “Das ist Mjölnir” was the reply.  For those who don’t know Mjölnir was Thor’s Hammer and is believed to be one of the most powerful weapons of the Gods by followers of Old Norse Religions.

Broder invited me to play it, passing me a mallet with the most honest warning ever, “be careful, he is addictive”.  The first time I gently touched it with a mallet I felt every cell in my body vibrate with raw power. Despite by this time having played countless types, makes and style of gongs and tam tams I had never felt like this. My face said it all, grinning from ear to ear “can I play it a little louder Broder?” I enquired, “Oh ja natürlich” he said grinning as I summoned pure Thunder.  I was hooked, this was my next Gong no matter the cost, I had to have it.   Thinking Suzanne, would, quite rightly, be more than a little put out if I turned up back home with what we shall just call a “considered purchase” I elected to discuss it with her when I got home.  On my return I told Suzanne of this mighty beast and she looked at me with quizzical eyes. When I told her the cost, she sensibly pointed out we could buy 4 or 5 additional Gongs for less than the cost of this one.

Not one to be defeated and with an air of cunning worthy of a fox I decided to play the long game. Suzanne had already agreed to come with me the following year and build a gong herself. Surely when she plays Mjölnir she will want it too?  When we arrived in 2019 I was like a kid on Christmas Eve and couldn’t wait to get to Broder’s Factory the next morning. We were first to arrive, and after saying hello to Broder and Ines I took Suzanne straight to the gong room and there sat Mjolnir; it was like seeing an old friend. “Play this Suzanne” I carped again and again like a broken record. Suzanne played it and had the expression of someone who still didn’t understand why I was so keen for this gong.  Sat next to Mjolnir was a beautiful big Water Gong and just as I was drawn to Mjölnir she seemed to be in love with this creation.  Throughout the couple of days of hammering Suzanne would drift regularly out of the workshop and into the gong room where I would find her sat in front of the water gong playing. I knew at that point that although I loved Mjölnir, I loved Suzanne more and that the water gong was coming home with us.

Upon our return home Suzanne had to fly almost straight away to Fez in Morroco for a long standing commitment.  I was staying in England as I was to be Best Man at a very dear friend’s wedding. This meant a few days on my own at home.  I was still slightly aggrieved about not getting my Mjölnir, and thinking, “..there is always next year”.  However the Universe itself conspired and 3 things happened in conjunction, a sort of unholy trinity if you will!

The following morning I awoke slightly thirsty, with a mild headache but the proud owner of (currently) the only Mjölnir in the UK.

Those of you who have played Mjölnir or heard him at a gong bath will know he doesn’t do any high notes and that’s what I love – that deep, dark, powerful rumble that starts way down in the depths of the Earth and then surfaces with a mighty roar and wave of power.  I will never forget being in a recording Studio in between the lockdowns last year where the Sound Engineer was proudly telling us about his soundproof booth. He told us that they had previously had a Heavy Metal band in but when he turned the volume down in the booth you couldn’t hear a thing.  Well, let’s just say when I started playing Mjölnir in the room next door his face was priceless. Even his desk was vibrating. He sat there, shaking his head, muttering “this is impossible, what is that thing?”