Alex introduces two of our gongs and explains the qualities each possesses.

The above definition is both accurate and boring in equal measure.  Anyone who has attended a gong bath or been to a yoga session where Suzanne has incorporated the gong will be aware that gongs are way more than metal discs. They produce an incalculable amount of sounds, overtones and notes.  But why are there so many shapes (yes shapes, not all gongs are round!) sizes and decoration on them?  Well, I hope over the coming months via these articles to give you a little more knowledge about these powerful instruments and the different types in use.

When is a gong not a gong?

Firstly, in order to salve the ire of any pedants reading this I should very quickly explain that there are several main types of Gong, indeed what most people think of as a “Gong” is actually correctly known as a “Tam Tam”. True Gongs generally having a boss or nipple in the centre. Then there are “Wind”, “Chau” and “Bao” Gongs and that’s before we break that down further to Tiger, Opera, Pasi or any number of other styles.  As I tell our students on the first lesson on our Gong Training Courses we are going to just agree to call them all “Gongs” for simplicity.

What most folk think of as Gongs, ie the Tam Tam, is the type that has become most prevalent here in the West so that is where we will begin this journey into the magical world of Gong.  I will ignore brands and makers except to say that the main players Paiste, Meinl, Oetken, Sabian et al each have there own range of “Symphonics” and “Planetary” as well as bespoke and signature pieces.

In this first article we can get 2 Gongs out the way in one hit, Symphonics and a Platonic Earth Year Gong.  These are two gongs that I particularly enjoy pairing together and often play them both at our regular Gong Baths as below. 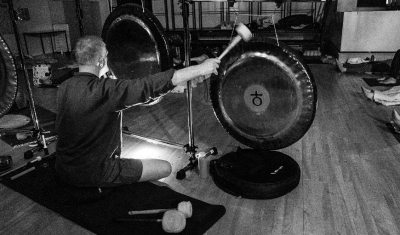 The symphonic gong is often regarded as the “workhorse” or staple for any Gongster.  I firmly believe that if you can only have one Gong then you cannot go wrong with a symphonic. It was our first gong and the one we use most widely still. They range in sizes commercially up to a whopping 80 inches and now that Erik Paiste has also debuted a 90 inch SC at the 2018 NAMM show it is likely that the largest symphonics can be produced at 90 inches too.  I emphasise commercially as in China they made and displayed a Gong over 200 inches in diameter for a festival.

These are “monster” gongs though and sound practitioners will more commonly use symphonics that are 24 to 38 inches. For scale the symphonic above is 32 inch and the Platonic Year (on the right) is 30 inch.  They can be plain, have the makers name on or like the Paiste 32 inch one below and have “Tai Lo” symbols which are commonly either in Black, Red or White. 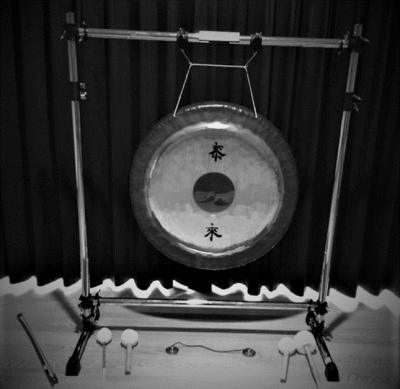 They can be described as having a harmonic and universal sound structure with the fundamental note of the gong being balanced with complex overtones.  The sound of these gongs can be influenced and varied through the players stroke and where on the gong they focus attention along with the size, weight and composition of the mallet being used.  They are absolutely fantastic on their own or “blending” with other Gongs to create a soundscape that you can actually “feel” not just hear.

That’s all I am going to say about symphonic gongs in this article. They really are the “Meat (or Tofu if like me you are plant based) and potatoes” of the gong world. Lets dive deeper into the Planetary world and introduce you to…. 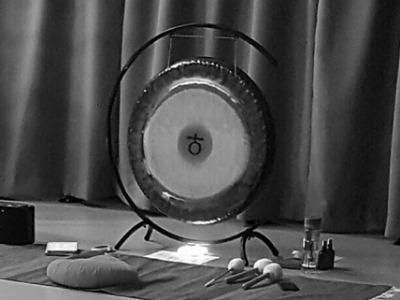 Ok, the technical stuff first. The Paiste Platonic Year Gong is made from Nickel Silver, an alloy typically made using 60% copper, 20% nickel and 20% zinc. The metal has many names and is also known as German silver, Alpaca, Argentan silver or nickel brass. It is tuned to F2/F-86,03 Hz with a 3rd Octave of F3/f-172,06 Hz and a 4th Octave of A4/a’-433,56 Hz.  The symbol in the middle represents Earth and differs from the Alchemical symbol for Earth where the cross is inside the circle.

“Okay, okay..” I hear you say “..but what is a Platonic Year?”  Well the planetary gongs were given tunings based on the orbital properties on the Earth, the Moon, the Sun, and the Planets, according to calculations of Hans Cousto. These unique characteristics are believed to allow planetary gongs to resonate in harmony with the cycles of the celestial bodies.  A Platonic Year also known as a “Great Year” or “Perfect Year” was theorised by Plato in around 360 BC / (BCE)1 and is very simply described as one complete cycle of all the equinoxes, or about 25,800 years (Plato himself at the time theorised 36,000 years). A more precise figure of 25,772 years is currently accepted after some “tweaking” by Isaac Newton in around 1700 AD / CE.2

This was the second gong that we purchased. It took a while to break in and was quite temperamental the first couple of times we used it. And then it sang and we fell in love with it. Suzanne uses this a lot during yoga classes – it works really well with the higher energy centres in the body and as such is great for facilitating meditation.

Well, there you go, you now know a little more about two of the Gongs you probably see regularly at our gong baths. More next month. 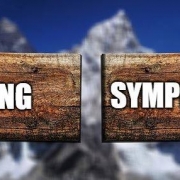 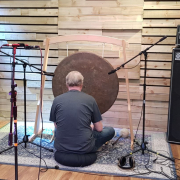