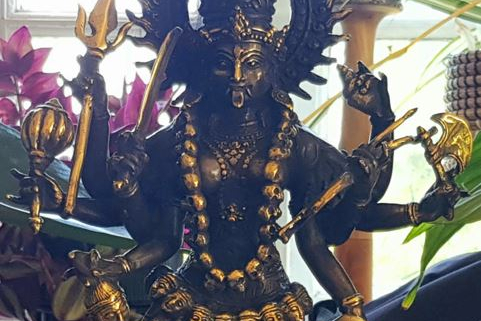 What can the fierce goddess Kali teach us?

Many Faces of the Goddess

We find Goddess worship mostly in Tantra. Tantra describes the esoteric traditions of Hinduism and Buddhism. References to tantric practices date back to BCE, but only began to appear in texts at the start of CE.  It rose to prominence from the 8th to the 14th century CE. It is a complex, technical system of many practices but it laid the foundation for much of what we know as Yoga today, introducing concepts like the chakras and the subtle (energy) body.

The Goddess takes many forms in Tantra, each encapsulating a different aspect or characteristic of the divine feminine. Saraswati, Durga, Lakshmi, and Radha are well known depictions. But perhaps the most famous of them all is Kali.

I have two goddesses  – a beautiful painting of Lakshmi upstairs, and, sitting right in front of me as I type this, is a large bronze statue of Kali. I have been reflecting on them both a lot recently. Lakshmi is the bountiful face of the goddess. Revered as the goddess of wealth, beauty, abundance, and fertility. To me, it’s starting to seem like Lakshmi is what we had; a bountiful paradise of a World, where, had we perhaps gone with the flow and lived in harmony, we could have had it all. Over this Summer, as drought has settled over much of the World, and wars have raged, I’ve felt that we are in danger of losing Lakshmi forever.

The softer goddesses like Lakshmi are very often the ones adopted by yogis and the wellness crowd. And who wouldn’t want to be Lakshmi? She is always beautiful, loving, and never lacking anything. Lakshmi is the goddess who hands out blessings and bliss, who is always kind and giving. This profile suits those typical modern yogis who base the practice around the heart, who speak softly, and never rock the boat.

Recently we were lucky enough to visit Sedona in Arizona. As we were only there for two nights, I booked a so-called vortex tour with a local company so we could explore the area and experience some of the famous Sedona energy. Vortices aside, we were guided by a local yoga teacher, with whom, initially at least I had a lot in common.

The Roe vs Wade ruling had not yet been over-turned but it was in the offing, and we discussed it. I casually remarked that I wished people in the yoga community spoke out more against injustice. The reply that I got, floored me. Our guide put her hands on her heart and said, you know I’m speaking with love, and then proceeded to say that by holding an opinion, I was part of the problem. In a nutshell, her argument was that the world is governed by complex patterns and order – she compared it to the human body, and the trillions of cells which, at any given moment, are doing their thing. In her mind, we shouldn’t interfere in this. She argued that perhaps if Roe v Wade was overturned then it could spark a female revolution, and so for that reason, we shouldn’t inflict our opinion and seek to alter the course of events. It was part of the natural order of things and had to happen.

This passive reaction to events is very typical in the Yoga community. And in a World where Lakshmi is one of the dominant goddesses, then why not? There is abundance and flow, and everything eventually returns to balance. But the problem is that we’re not living in that kind of World anymore. Certain parts of the population have not been so passive and have actively undermined the balance to the point that it is going to take serious fast action to restore any kine of equilibrium. As I argued with the guide in Sedona – the human body, in isolation, is a wondrous thing. However, would she not intervene if her cells stopped producing ATP due to pollution? Yoga is all about actively restoring balance, of course she would.

Kali is definitely not a passive goddess. She is rage itself – in one of her many hands she holds a severed head, blood dripping from her extended tongue, a necklace of skulls and a belt of arms. She wields weapons and is ferocious. Kali isn’t a go with the flow kind of goddess. She sees what needs to change and makes it happen. Kali is the spirit of revolution, people power, the force behind the Arab Spring, Tianamen Square, Black Lives Matters and so on. She promotes youth, people power, expansiveness, and action.

Kali wouldn’t stand back and let Roe vs Wade be overturned. She would fight back. Kali is said to have been born out of Durga’s rage in battling demons. Durga got so angry that Kali manifested through her Third Eye and promptly killed the demons. She is very often pictured standing on top of a man, reversing the hierarchical order. She is the supreme creative force – Shakti – without whom Shiva, pure consciousness, would be no more than a corpse. In Tantra, existence itself is born out of the union between Shakti and Shiva.

Revolution and Tantra have a long association. Kali was harnessed for her radical potential and resistance in Bengal during British rule. She is also the spirit of counterculture and rock n’roll. The famous Rolling Stones logo is not Mick Jagger’s tongue, but that of Kali. That’s why it is so depressing that modern Yoga seems to turn away from activism, and dismiss politics as negative, or having no place in a spiritual practice. Confrontation and speaking out, holding an opinion, is frowned upon. Yoga is to be bland, and dissociated from what is happening off the mat. Yet, how then do we account for Kali? She is a valid facet of the Goddess, ruthless and compassionate, symbolising creation and destruction as reflected in the rhythm of the Universe.

When Only a Woman will do

My connection to Kali is growing. I look to her when I need the courage to act, to shed my ego, to speak out, and to get rid of things that no longer serve anything except my desire for comfort. She frightens me greatly, but I trust that any lessons she teaches me will lead to the deepest love that only she is said to be capable of delivering.

Kali’s time is said to come at the apocalypse, when demons are taking over the World, and only a woman can save it. This is Kali’s time to step up and save Lakshmi. We need to embrace her, be brave and courageous and demand action from World leaders. And if that doesn’t work, then take power back from them and give it to someone who will lead pragmatically. Someone who will start addressing climate change, war, poverty, and stop playing around with populist tax cuts, culture wars, or conflict.

Times are tough, I get that it’s difficult to face up to everything that’s going on. It’s much easier to pretend it isn’t happening or to feel helpless. But no lightning bolt is going to come out of the sky to fix this, no matter how hard we try to conjure one up. The lesson now is to unite and to act. To realise our power and our right to feel angry & betrayed. If we don’t engage our inner warrior now, our sacred Kali, then I’m starting to think it’s game over. 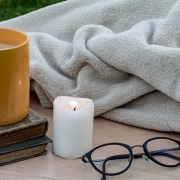 The Cult of Being Nice in Yoga

The Path to Success
Scroll to top